The Minister of state for higher Education doctor John Chrozestom Muyingo has assured Kasese of his support to improve the performance of Kasese District Local Government education sector. He said this during his visit to Kasese yesterday 10th May 2020 to carry out a needs assessment exercise of the schools which were affected by the floods. 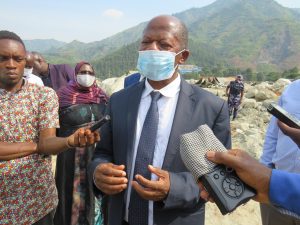 He expressed his disappointment with the performance of Kasese District in 2019 PLE results where only 10% of the candidates appeared in first grade . 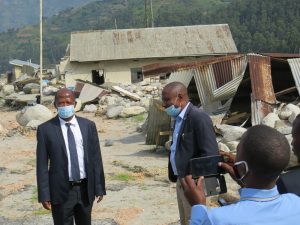 He added that his visit will not only look at the affected school infrastructure but will take a critical study of what is affecting the performance of Kasese as a district. Hon. Muyingo said, “Am not only looking at only the infrastructure, I need a permanent change in away this district performs academically, I will want to critically look at what is happening with the schools of Kasese and see what we can do”. 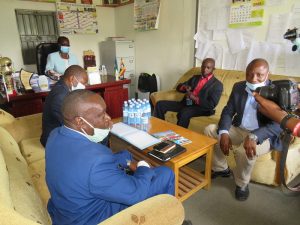 The minister visited Kilembe secondary School, Katiri and Bulembia School in company of the District Chairperson, The Mayor Kasese, H.E the Ambassador of Uganda to China Dr Crispus Kiyonga, the technical staff from the Ministry of Education, Kasese District Local Government and Kasese Municipality, the Press and other district stake holders which proceeded with a briefing at Mayor’s Garden Kasese.

Kasese schools have been affected by COVID 19 and the floods which concurrently occurred on 7th, 10th and 20th May 2020 leaving 25 schools both government and private in a complete state of devastation with furniture, building structures and reading materials either washed away or buried by the mud. In addition, some schools are serving as quarantine centers for COVID 19 and camps for the people who were affected by the floods which adds on their vulnerability .

While addresing the press, Mr george Mainja the District Education Officer said that they are plann

The district chairperson represented by his deputy Hon. Ntabose Gideon, called upon the Minister to look into the challenge of some subcounties not having any secondary school. On this, the Minister responded that government has started on the program of constructing secondary schools at least in each subsounty and by the end of December this year, they will have put up 117 secondary schools and next year, they plan to construct over 200 schools all over the country and according to the District Education Officer  Mr George Mainja, Kasese has  6 subcounties without any government school.

The RDC in his address during the meeting at the district headquarters appreciated the Minister and informed him about the challenges with online studying in Kasese where only 1 radio station is authorized to be used and only one local language yet there are many tribes in Kasese.

The minister recognized the Ambassador of China Dr.Crispus Kiyonga as a pillar of development who inspired him to join politics and has always encouraged him to support the people of Kasese.

H.E Dr. Crispus Kiyonga appreciated d efforts to support the people of Kasese and mentioned that more plans are in the pipeline to continue mitigating the effects of the floods.

Kasese has received several ministries responding to the floods after the president’s visit including the Office of the prime Minister, Ministry of works, Ministry of Education and Ministry of health and more responses are underway. This is a good gesture from the government of having the people of Kasese at heart